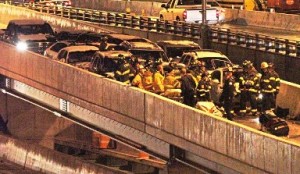 Icy roads may be the cause of the multi-car pileup that sent at least five people to area hospitals.

The accident on the Gowanus Expressway near Sixth Avenue in Bay Ridge happened at about 8 p.m., fire officials said.

The pileup happened in the one lane of the Gowanus Extension that is currently under construction, so the cars essentially had nowhere to go, sending them cars crashing into one another.

Immediately following the crash, the ramp from the Belt Parkway to the Gowanus Expressway was closed, and the westbound ramp toward the Verrazano-Narrows Bridge and Staten Island was blocked with emergency vehicles. Read more at CBS 2 NY.