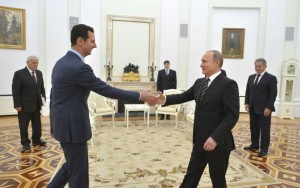 The Kremlin revealed details of the surprise visit Wednesday, but did not say whether the Syrian president had returned home.

The trip to Moscow is believed to be Assad’s first foreign trip since the Syrian civil war erupted in 2011 and comes three weeks after Russia began its campaign of airstrikes in Syria. Read more.