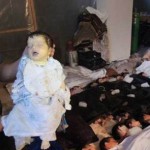 As Congress debates whether to authorize President Obama to engage in a punitive-deterrent military attack on Syria, the Assad regime is adopting what I have called the “dead baby” strategy, perfected by Hamas in its battles with Israel.  This approach is as simple as it is brutal:  Force the United States, as Hamas forced Israel, to kill as many civilians as possible by deliberately moving legitimate military targets into civilian areas, or by moving civilians into military areas.  Democracies, such as the United States and Israel, which care about avoiding civilian casualties, are then put to the tragic choice of either foregoing a legitimate attack against military targets, or by attacking them, being blamed for the civilian casualties, that were willfully caused by their enemies’ illegal use of human shields.

This strategy can only work in an age of instant and pervasive television coverage of military actions.  Syria and Hamas know that every baby killed by a US or Israeli rocket will be paraded in front of television cameras being held by grieving mothers and fathers.  It is these vivid and horrifying pictures that are the goal of the dead baby strategy.  Syria and Hamas understand that these emotional pictures will mask the reality that these dead babies are not “collateral damage” caused by legitimate military actions, but rather deliberate targets selected by Syria and Hamas in a cynical attempt to shift blame from them onto the democracies that try their best to avoid civilian casualties, even in the face of deliberate efforts by Hamas and Syria to multiply them.

Lest there be any doubt about Syria’s intentions.  Listen to retired American General David A. Deptula:

The additional time gives Assad the potential advantage of complicating United States targeting by surreptitiously moving people or even chemical munitions into them, aiming to create casualties or chemical release as a direct result of US attacks.

United States General Martin E. Dempsey, Chairman of the Joint Chiefs of Staff, confirmed that assessment when he said that American spy agencies are “keeping up with that movement”, which includes prisoners who may be used as “human shields.”

If there is any doubt that Hamas has used this despicable strategy, listen to Fathi Hammad, a Hamas member of the Palestinian Legislative Council:

For the Palestinian people, death has become an industry, at which women excel, and so do all the people living on this land.  The elderly excel at this, and so do the mujahideen and the children.  This is why they have formed human shields of the women, the children, the elderly, and the mujahideen, in order to challenge the Zionist bombing machine.  It is as if they were saying to the Zionist enemy: ‘We desire death like you desire life.’

When Hamas employed this dead baby strategy against Israel, it was a resounding success.  Despite the fact that Hamas deliberately fired rockets from schoolyards, hospitals and densely populated civilian areas, the international community blamed Israel for trying to prevent rockets from attacking its civilians by targeting the rockets and occasionally killing civilians.  It was Israel, rather than Hamas, that was accused of “war crimes,” even though it is clearly a war crime to use civilians as human shields.  Israel had little choice but to protect its own citizens against rocket attacks, but the world focused not on the moral correctness of Israel’s decisions, but rather on the gruesome pictures of dead Palestinian babies, even though some of them were actually caused by errant Palestinian rockets.

President Assad of Syria has apparently learned this lesson well and is now prepared to act on it.  This will once again put a democracy, this time the United States, to a difficult choice: forego legitimate military targets, thereby increasing the likelihood that Syria will continue to gas its own citizens; or attack these military targets, inevitably causing some civilian casualties and playing into the hands of Syria’s dead baby strategy.

If the media and the international community continue to enable these tyrannical regimes by falling for this cynical dead baby strategy, it will continue and expand in scope.  It’s a win-win strategy for tyrants who don’t care about their own civilians, and a lose-lose strategy for democracies that do.

Another reason why this strategy succeeds is that the world seems to care far less about civilian deaths caused by Arab and Muslim nations against their own citizens than deaths caused by Western democracies.  If American bombs were to kill 100 Syrian civilians, there would be more outcry than when 100,000 Syrians, including tens of thousands of civilians, have been killed by Syrian forces on both sides of this civil war.  This is pure and simple racism, holding Western democracies to a higher standard than Muslim tyrannies and theocracies.  It’s is an old story, but it will once again rear its bigoted head when and if American forces kill Syrian civilians who were deliberately placed in harm’s way as human shields by the Syrian regime.

To stop this once and for all, the international community and the media must place the blame for these dead babies where it belongs:  on the shoulders of tyrants who deliberately use their own civilians as human shields.