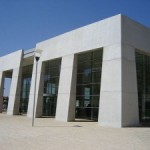 Lithuanian President Dalia Grybauskaite is currently on a 4-day trip to Israel, which includes a visit to the Holocaust commemoration museum Yad Vashem. It is the hope of International Jewry that the show of respect to the Jewish Holocaust victims will also extend at home, with her government’s cancellation of the plans to Develop a Congress Hall on top on
the Snipiskes Jewish cemetery.

The over 500-years old Snipiskes cemetery – where Vilnius’ most famous
Jewish leaders are interred – was desecrated by the Nazis and Soviets. The
latter built on it a now-abandoned Sports Palace. Desecration continued
under Lithuania’s democratic government, with the construction of two
apartment buildings in the cemetery. Recently, the government purchased the
abandoned Sports Palace to redevelop it into a Concert and Congress Hall.

Leading Rabbis, in Israel and the US, publicly decried the plan, which will
turn the cemetery into a public arena. In a letter, a dozen rabbinic leader
of major Lithuanian communities, including the leaders of the largest
Lithuanian-Jewish Yeshivos, protested “any use of this sacred site other
than for prayer and solemn reflection.” In August, an international rabbinic
delegation traveled to Vilnius to plea with the government to cancel the
plans.

The plans are also opposed by local residents, including Vilnius’ Chief
Rabbi Chaim Burstien, who was subsequently in retaliation, and by Efraim
Zuroff, chief Nazi-hunter of the Simon Wiesenthal Center and the director of its Israel Office and Eastern European Affairs, and many others.

“Cemeteries are the holiest places of Judaism. Establishing a public Concert and Congress Hall on these holy grounds is prohibited under Jewish Law, and is a grave violation of the sacred memory of those interred in the cemetery,” said Rabbi Lazar Stern, Chairman of Asra Kadisha, an
international cemetery-protection organization. “Lithuania is the country
with the largest percentage of Jews who perished during the Holocaust. Is it too much to ask that at least the little that is left of the centuries-old
Jewish presence should be fully preserved and protected? We hope that
President Grybauskaite will return home with a commitment to heed the outcry
of worldwide Jewry, and will convince her government to cancel plans to
desecrate this holy site.”

Lithuania was among a handful of countries singled out by New York City Bill
de Blasio, during his keynote address at the Annual Conference of Mayors in
Jerusalem, for the desecration of cemeteries. “This anti-Semitism can be
seen in the desecration of cemeteries in France, Poland, Hungary, Lithuania,
and Germany. That reminds us that it’s not any one religion that is the
enemy. The enemy is hatred itself,” Mayor de Blasio said.

In a recent letter, the European Commission stated, on behalf of President
Juncker, that they are aware of the sensitivity of and controversy
surrounding this project, and denied report that it will be supported by
European funds.