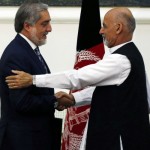 After months of bitter disputes, Ashraf Ghani will become the president of Afghanistan. He and his opponent, Abdullah Abdullah, signed an agreement to form an Afghan government in unity on live television on Sunday.

Under the unity deal, Abdullah will still get a significant amount of power. He will get to nominate a national CEO (including, potentially, himself) who will effectively serve as a prime minister. Both men shook hands and embraced in a clear attempt to unify a country after a rancorous election, during which both candidates accused the other of fraud.

Outgoing president Hamid Karzai thanked both men for agreeing to deal for the sake of “the progress and development of this country.” Read more at the BBC.