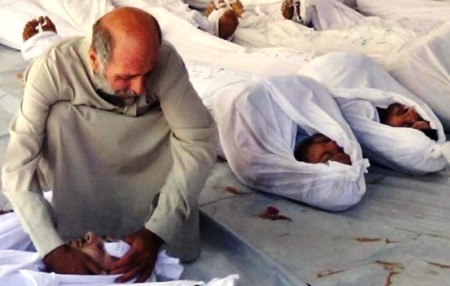 Meanwhile, CNN’s Frederik Pleitgen, who sat down Tuesday for an exclusive interview with Syria’s information minister Omran al-Zoubi, has the distinction of being the only western TV correspondent in the capital.

For days, media war drums have been beating in network studios and across op-ed pages, with prominent columnists and commentators calling on President Barack Obama to strike Syrian President Bashar al-Assad’s regime in retaliation for a a horrific chemical attack. The question in the U.S. media Tuesday wasn’t if an attack takes place, but when. U.S. officials anonymously hinted at Thursday .

Social media has played a significant role the world’s understanding of Syria’s long-runing civil war that’s resulted in more than 100,000 deaths. But journalists still serve a vital function in trying to independently verify the competing claims from government officials and rebel leaders, while gaining perspective from the ground amid the heightened war rhetoric of “red lines” and target lists.

“People here in Damascus are afraid of the U.S. getting more involved and that possibly tipping the scales in this conflict,” Pleitgen told The Huffington Post in an email Tuesday “The vast majority of people we speak to want stability more than anything else in order to preserve their way of life. Government officials seem to now understand how serious the U.S. is about military action. Their tone has certainly become more reserved, even as they continue to say they would retaliate if America attacks.”