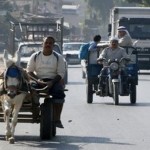 The heads of Hamas’ military wing are focusing on preparing for the next war against Israel. They blame Hamas’ political leadership for preventing them from making that surprise move inside Israel during the 2014 Gaza war that should have wreaked destruction and death and left the Israeli public in shock.

They won’t listen to the political leadership in the next round of fighting. They will once again try to launch simultaneous attacks on several targets inside Israel.

At the same time, Hamas is working on building up its stockpiles to allow for continued rocket fire over a period of many weeks.