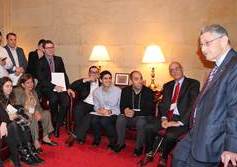 In a quiet office in the Capital building in Albany, NY, Maury Litwack, OU Advocacy’s Director of State Political Affairs and Outreach, gave three members of Brooklyn’s Jewish community a quick run-down on the possibilities of government assistance in the Jewish tuition crisis.

“This is the most critical time for Jewish education,” Litwack explained, since the state budget will be closed by April 1st. Last year, an additional $14 million was earmarked for private and parochial schools. This year, OU Advocacy-Teach NYS is working to delivery significantly more. If the items in the proposed budget that potentially include private schools pass-including the Education Investment Incentives Act and the Smart Schools Bond Referendum-Jewish day schools could receive hundreds of millions of dollars.

Merging in 2012, the joint initiative of OU Advocacy-Teach NYS focuses on advocating for the needs of the New York non-public school community in city and state government.

When someone started listing former state senators, Jeff Leb, OU’s Director of Political Affairs for New York State, knocked them off on his fingers. “He’s a judge now. He’s a City Council member.”

The agenda behind OU Advocacy-Teach NYS’ mission to Albany’s statehouse was broader than the funding itself: to mobilize Orthodox voters to pressure their elected officials to support private school education. In the past two years, OU Advocacy has added full-time dedicated state teams to its roster, taking on government funding for the private school system on a state-by-state basis, from Florida, to New Jersey and even Nebraska.

“It’s the mistake of depending on one or two politicians for our issues when we can really influence the entire legislature,” Litwack explained. “Instead of just having two friends in the legislature who we go to for all our issues, we can build relationships with every Assembly member and senator. We want to do what AIPAC does. We need real relationships. We need people.”

That day the mobilization was literal. OU Advocacy-Teach NYS chartered a bus that left from Ocean Parkway in Brooklyn at seven in the morning, filled with 25 participants, representing five yeshivas: Yeshiva of Flatbush, Barkai Yeshivah, Magen David Yeshivah, Yeshivat Darche Eres and Yeshiva Shaarei Torah. Along with the school officials were members of the community and six high school students from the Yeshiva of Flatbush. The following day, another delegation headed to Albany, this one with constituents from Manhattan, Riverdale and Westchester including officials, parents and students from Ramaz, SAR, Manhattan Day School, Solomon Schechter School of Westchester and Westchester Day School. And a mission earlier in the month, representing the Five Towns, brought officials, parents and students to Albany from the Hebrew Academy of the Five Towns and Rockaway, Hebrew Academy of Long Beach, Rambam Mesivta, Yeshiva Darchei Torah and the Schechter School of Long Island.

In the hours that followed that initial meeting, Jeff Leb and fellow members of the OU Advocacy-Teach NYS team shepherded the constituents from the office of one legislator to another-down the long and confusing hallways of the statehouse and into the offices of senators and assembly members who were bemused by how crowded their small offices suddenly became.

State Senator Kevin Parker who represents parts of Brooklyn searched for a word to describe the gathering. “A kibbutz?” he asked, before offering his visitors some kosher candies.

While it’s difficult to know what the long-term effects of the lobbying effort will be, the immediate benefit of the mission was clear. Senator Parker recommended drafting a letter of support for the measure that OU Advocacy-Teach NYS requested and then called one of the most senior members of Gov. Cuomo’s office to arrange a meeting for the following week for members of the delegation.

Sam Sutton, co-chair of OU Advocacy-Teach NYS, said, “Without lobbying for our own interests, legislators have no impetus to worry about things that would benefit education in non-public schools. Even more critical is the fact that there are very large, powerful organizations that are lobbying legislators against the initiatives we care about. If we don’t lobby for the issues that benefit non-public schools, not only will we not gain, we’ll lose.”

State Assemblyman Phillip Goldfeder, a staunch supporter of private school education, said that the effects of the lobbying missions shouldn’t be understated.

“You make the story real,” he said to the delegates. “Your job is to remind us-the legislators in Albany-why support for non-public education is so important to you and your community.”

The challenge OU Advocacy-Teach NYS also faces is making the Jewish community more aware of the political world. Asm. Goldfeder commented that after passing legislation that aided private schools, he received 400 letters from Catholic school parents thanking him for his support but only four letters from Jewish day school parents.

An additional benefit of the missions is that they expose the legislators to the missions’ most effective spokespeople: the students themselves, or so said Senate Education Chairman John Flanagan, who called the high school students, “the perfect ambassadors.”

Fanya Donin, 16, of the Yeshiva of Flatbush, made her case to him unequivocally. Her parents are from Eastern Europe.
“I’m the first person in three generations to have a Jewish education,” she said.

The day ended with a meeting with Assembly Speaker Sheldon Silver and a photo op on the Assembly floor where the visitors took turns posing with the Assembly gavel.

Litwack said this was only the beginning of the effort. “This year we took 150 people to Albany,” he said. “Next year we want 1000.”