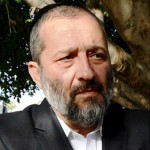 Minister of the Economy Aryeh Deri announced his resignation today. The Ministry of the Economy now passes to Prime Minister Bibi Netanyahu’s hands, paving the way to approval of the gas outline, the arrangement with the gas exploration companies designed to mitigate their monopoly position and to enable development of the Leviathan gas reserve to proceed. Deri had refused to exercise his powers to circumvent the anti-trust commissioner, who objected to the arrangement.

Netanyahu will be able to exercise those powers and sign off on the gas plan himself. As minister of the economy, Netanyahu will also be able to determine the identity of the next anti-trust commissioner.

Deri will continue to head the Ministry for the Development of the Negev and Galilee. At its meeting today, the government is expected to approve the expansion of that ministry, and it will become the Ministry of the Periphery, with an additional budget of NIS 300 million. Deri will receive responsibility for twelve additional local authorities, and also for 210 socio-economically weak neighborhoods in cities in the center of Israel.

The prime minister and Shas chairman Deri have yet to reach agreement on the additional portfolio that the latter will receive as compensation for leaving the Ministry of the Economy.

Netanyahu was able to overcome last minute opposition to the move from the Habayit Hayehudi party by assuring Education Minister Naftali Bennett that Deri’s new powers would not encroach on the field of education.