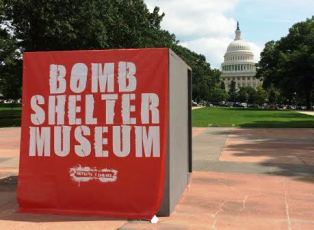 Artists 4 Israel, a group that empowers artists to express their support for Israel and her cultural freedoms through the creation of art, established a ‘Bomb Shelter Museum’ set in front of Capital Hill in Washington. The bomb shelter is a replica of one used by Israeli citizens throughout Israel. Inside, pictures of the rocket attacks are displayed and there is a multi-media presentation aimed at conveying what Israeli civilians experience when they are under attack by rockets fired by Hamas from Gaza.  The display has been previously presented in New York and Miami.

Craig Dershowitz, President of Artists 4 Israel, stated: “The ‘Bomb Shelter Museum’ was originally created as a museum of living history, a work of art to show people exactly what’s happening around the world. We don’t need to wait for the future to talk about the past.”

One activist said that the idea was to focus on the people rather than on the events, “I want people to feel”, she said.

“It was really intense; kind of a wake-up call. You don’t know what to expect,” said one of the ‘museum’ goers.

One of the objectives of the display at Washington is to “let the leaders of this country experience life in a bomb shelter. Those who make decisions in this country should understand the reality of living through a Hamas rocket attack against Israel,” the organization stated.

The organization further engages in pro-Israel activity, such as going on missions to Israel where they have painted everything from bomb shelters in the South to UN positions near the Syrian border in the North.