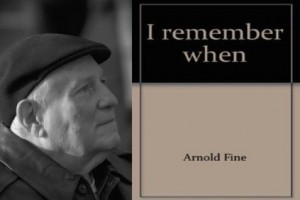 Arnold Fine, a beloved fixture at The Jewish Press for more than half a century, passed away in his sleep at his home in Battery Park City, Manhattan, on Friday, September 5, at age 90.

Fine’s association with the late founder of The Jewish Press, Rabbi Sholom Klass, began before The Jewish Press was launched when Fine worked for The Brooklyn Daily and Brooklyn Weekly, both published by Rabbi Klass.

In the mid-1960s Fine started writing a weekly Jewish Press column called “I Remember When” (an exclamation point would eventually be added to the title). The column, which brought to life the sights, sounds, and smells of New York City in the 1930s and ’40s, quickly became one of the paper’s most popular features and to this day has continued to enchant readers of all ages.

“The subjects Arnie wrote about are timeless and new generations have always taken to the column’s warmth and nostalgia,” she said. “His writings will live on even though he is no longer with us.”

Fine’s writing spoke to generations of readers, both Jewish and non-Jewish. Several of his articles appeared in the Chicken Soup for the Soul series of inspirational short stories; his article “The Letter in the Wallet” appeared in Reader’s Digest and has been reprinted in numerous anthologies and appeared on countless websites and blogs (sometimes under the shorter title “The Wallet”).

In addition to his work at The Jewish Press, where he eventually served as senior editor, Fine was a photographer, a musician, and an educator.

An armed forces veteran, he had the distinction of being in both the Navy and the Army. He joined the Navy at the end of World War II and then found himself drafted by the Army a few weeks later.

After the war he roamed New York City as a press photographer with a 4×5 camera shooting for local newspapers. Looking to get ahead in the newspaper business, he went to college and earned a bachelor’s degree thanks to the GI Bill.

Later on, after going back to college for a master’s in education, he became a celebrated special education teacher in the New York City school system. He was a pioneer in teaching brain-injured children and was loved by his students and their parents.

A natural musician, he played the clarinet, saxophone, and piano and loved the old big bands and their music.

Late in life he developed Parkinson’s disease but was still able to get around with the aid of a wheelchair. He was a frequent sight in Battery Park City where he could occasionally be spotted with the family poodle, Lisette, sitting on his lap as he wheeled down the Esplanade.

A loving husband, father, grandfather, and great-grandfather, he was predeceased by his wife, Edith, who passed away in 2006. He is survived by three children, Jay (spouse Cindy), Brian (spouse Dina), and Martin (spouse Janet); six grandchildren, Eric (spouse Cece), Daniel (spouse Tara), Joan, Sarah, Max, and Adam; and two great-grandchildren, Ella and Eve.