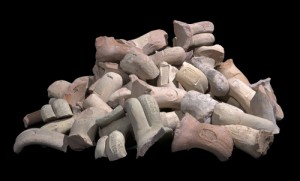 Archaeologists believe they have uncovered the location of the Acra fortress from the Maccabean Revolt against the Greeks in Yerushalayim’s Ihr Dovid.

The fortress was discovered as part of archaeological excavations conducted by the Israel Antiquities Authority (IAA) in the Giavti parking lot at the City of David, which is part of the Jerusalem Walls National Park.

The Acra fortress was built by Selucid Greek Emperor Antiochus Epiphanes following his sack of Yerushalayim in 168 BCE. The fortress went on to a play a significant role in the Maccabean Revolt against the Selucids and was later destroyed in 141 BCE. The location of the fortress, which was described in the Book of Maccabees as well as by Roman-Jewish historian Josephus Flavius, has eluded archaeologists for over a century.

“This sensational discovery allows us for the first time to reconstruct the layout of the settlement in the city, on the eve of the Maccabean uprising in 167 BCE,” Dr. Doron Ben-Ami, Yana Tchekhanovets and Salome Cohen, excavation directors on behalf of the IAA, said in a statement.

According to the archaeologists, the new finds “indicate the establishment of a well-fortified stronghold that was constructed on the high bedrock cliff overlooking the steep slopes of the City of David hill.”

The archaeologists noted that the Selucid-era coins and the wine jars imported from the Aegean Sea region found at the site also indicated the non-Jewish identity of the inhabitants. Additionally, sling stones, arrowheads, and ballistae stones were found as evidence of Maccabean attempts to conquer the stronghold.