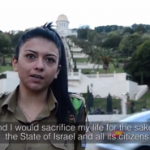 An Israeli Arab youth from northern Israel who spoke out against the kidnapping and murder of three Israeli teens in June has been forced to leave the country due to death threats.

The had youth posted a video on Facebook in which he called the kidnappers and their supporters cowards, and called for the return of the abducted teens, who at the time were believed to possibly be alive.

One of the youth’s videos, in which he says he is a Muslim but also a loyal citizen of the state of Israel and its democratic values, went viral. The attention brought a slew of angry responses from the Arab sector. After a series of death threats, including by some family members, the youth was forced to go into hiding.

This past weekend, the youth opened a new Facebook page and wrote in English, “I am an Arab Muslim and proud Zionist.” The teen wrote on the page that he was living abroad after having to leave Israel due to the death threats.