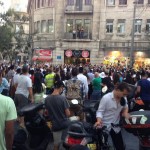 The body of an Arab teenager was found in the Yerushalayim Forest this morning and police suspect he may have been kidnapped from the East Jerusalem neighborhood of Beit Hanina overnight and killed in a revenge attack for the killing of three Israeli teens.

Police were also said to be investigating the possibility that the teenager was killed as part of an ongoing feud between rival families.

Dozens of Arabs massed on the light rail tracks in the neighborhood of Shuafat and clashed with Israeli security forces early Wednesday when reports of the boy’s death broke.

The body, which was charred and bore signs of violence, was found an hour after police were informed of a youth from Shuafat being forcefully loaded into a car in Beit Hanina.

Israel Police spokesman Micky Rosenfeld, told Reuters that police had received word that the youth had been “pulled into a vehicle and possibly kidnapped” and had set up roadblocks in an attempt to intercept the vehicle.

Police later “discovered a body in the Jerusalem forest and were looking to see if there was a connection between the missing youth and the body that was found,” Rosenfeld was quoted as saying.

Because of its condition, the body was not immediately identified.

The incident came two days after the three Israeli teens who had been missing for over two weeks were found slain and buried in the West Bank.

Read more: at The Times of Israel