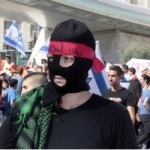 Strong opposition to Operation Protective Edge continued in a number of Israeli Arab communities over the weekend, with protests against the Israeli military action held in Haifa, Acre, Sakhnin, and the town of Arraba in the Galilee.

In a separate incident, protesters waved Palestinian flags and yelled anti-military and anti-government slogans during a demonstration organized by the northern branch of the Islamic Movement in Kafr Kana in the Galilee. Zoabi’s colleague MK Jamal Zahalka participated in the event, calling it “a legitimate protest in light of the killing of our people in Gaza.”