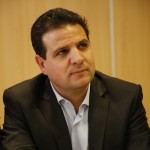 Ayman Odeh—leader of the Joint Arab List, the Israeli Knesset’s alliance of Arab political parties—on Thursday refused to address a meeting of an umbrella body representing 50 American Jewish organizations because the meeting was held at premises shared by the Jewish Agency for Israel and other “Zionist entities.”

“We received several suggestions that MK Ayman Odeh be invited and, in keeping with the Conference’s decades-long tradition of providing a forum for a wide variety of points of view on issues affecting the American Jewish community’s agenda, we extended the invitation,” said Stephen Greenberg, chairman, and Malcolm Hoenlein, executive vice president, of the Conference of Presidents of Major American Jewish Organizations. “We have had leaders of virtually every faction and party in the United States, Israel, from friendly and unfriendly countries, and none ever refused to appear. For a member of the Knesset to assert that he will not enter a premises because it has an association with Zionist entities, like the Jewish Agency, is disturbing and dismaying. Representatives of a broad spectrum of organizations came to hear him and were rightly upset by his decision not to appear, although he was in the building lobby.”

The Conference of Presidents added, “We hope MK Odeh will reconsider his stance if he, indeed, wants to advance coexistence in Israel and promote understanding abroad. As a leader, he cannot succumb to the pressures of extremists in his constituency, but should take advantage of such opportunities to provide his perspective, and that of those he represents, to an important and interested audience.”