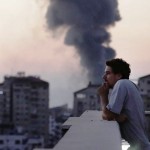 Three members of a bomb disposal unit were killed in Gaza on Wednesday when an Israeli artillery shell they were attempting to move exploded, officials said. The blast in the northern town of Beit Lahia also killed 35-year-old Italian journalist Simone Camilli, who was working for The Associated Press. He was the first Western reporter to die in the current conflict.

The AP said its journalists were accompanying the team on an assignment when the explosion happened. “The areas where there was bombardment and incursions are full of unexploded ordinance, but we cannot count them yet because some of them are still below the rubble,” local police spokesman Kamal Bakir told NBC News. A temporary truce between Israel and Hamas has stemmed the bombings and rockets fired from and into the coastal enclave as both sides continue peace talks in Egypt.