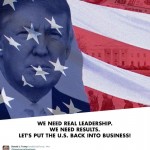 Republican voters view Donald Trump as their strongest general election candidate, according to an Associated Press-GfK poll that highlights the sharp contrast between the party’s voters and its top professionals regarding the billionaire businessman’s ultimate political strength.

Seven in 10 Republican and Republican-leaning registered voters say Trump could win in November 2016 if he is nominated, and that’s the most who say so of any candidate. By comparison, 6 in 10 say the same for retired neurosurgeon Ben Carson, who, like Trump, has tapped into the powerful wave of anti-establishment anger defining the early phases of the 2016 contest. Read more here.