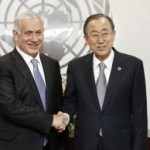 Entitled, “The Historical Development of Human Rights Throughout History,” the document purports to be a summary of human rights policies held by a number of civilizations over the ages, including Jewish thought on various aspects of Mosaic prohibitions against “murder, adultery and theft.”

While the article begins by praising Judaism as “a heavenly religion revealed to the Prophet of Allah Musa [Moses], peace be upon him, included human rights through its focus on the goal of liberating the individual and the community. The right to freedom from oppression is a supreme value highlighted in Jewish holy books (Rashidi: 2005: 60). The commandments of Moses, peace be upon him, include prohibiting murder, adultery and theft.”

But soon enough, the anti-Semitic and anti-Israel stereotypes kick in.

“But if we look around us at communities supposedly protecting human rights and at well-known oases of democracy we do not see [human rights] but instead charges that the victim was a terrorist or supporter of terrorism, and also pornography justified freely as rights. We see monopoly and fraud justified by the right of ownership and earnings in any form (Mokbel: 2005: 5) All of this happened as a result of distortion and misinformation by the Jewish clergy. The Jews in the sixth and seventh centuries promoted social corruption (1981: 39), and the claim that they are God’s chosen people demonstrates that the Jews did not know anything about human rights,” the author claimed.

In a related development, both the Bnai-Brith and the Anti Defamation League on Tuesday criticized recent remarks by UN Secretary-General Ban Ki-moon holding Israel almost exclusively responsible for the summer’s clashes with Hamas in Gaza.

Ban, speaking at a Gaza reconstruction conference in Cairo on Sunday, and in Ramallah a day later, said Israel was at fault for “a restrictive occupation that has lasted almost half a century, the continued denial of Palestinian rights and the lack of tangible progress in peace negotiations.”‎

In response, Bnai-Brith demanded that Ban “refrain from making biased, inflammatory remarks perpetuating a false image of Israel as an occupying aggressor. Ban, in his comments, did make mention of Hamas rocket attacks that were ‘fired indiscriminately causing fear, panic and suffering.’ However, he does not account for anti-Israel terrorists’ role in igniting and sustaining conflict-a stunning and inexplicable omission.”

The group said that “the open fanaticism, terrorism and armament of Arab extremists is the patent ‘root cause’ of recurring conflict with Israel.”

Donor nations pledged some 5.4 billion dollars – 1.4 billion more than the Palestinians themselves had requested – at the session.

The ADL, for its part, expressed “deep dismay” at what they termed Ban’s “stunning lack of objectivity” in remarks made alongside Palestinian Authority Prime Minister Rami Hamdallah in Ramallah, and in Jerusalem with Israeli Prime Minister Benjamin Netanyahu.

“It encourages Palestinian unilateral steps and conveys to Hamas there are no consequences for its murderous terrorism,” he said.

Ban “consistently places the onus on Israel,” according to Foxman, who contended in a statement that “such a one-sided characterization of the ‘root causes’ undermines the Secretary General’s credibility as an unbiased observer.”