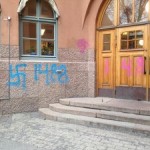 The Community Security Trust (CST), an organization providing security, training, and advice to the Jewish community in the United Kingdom, is reporting that anti-Semitic incidents in the country have risen by nearly 500 percent since the start of the current conflict between Israel and Hamas in Gaza.

CST received more than 240 calls on anti-Semitism in the month of July alone, the organization said, up from around 50 per month earlier this year.

“The actual data is bad enough but cannot convey the mood of the Jewish community, with many people telling us that they have never felt so bad, have been under such pressure, nor worried so much about what the future may hold,” said Mark Gardner, the communications director for the CST, according to The Independent.

“Some of those anti-Israel and anti-Zionist passions found their physical outlet against Jewish targets, as they always do,” he said.