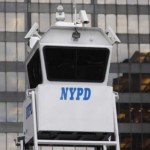 Three swastikas and the word “Hitler” were discovered Wednesday morning by students outside P.S. 90 Edna Cohen School in the Brighton Beach section of Brooklyn, police said.

NYPD Officials say the students discovered the anti-Semitic symbols and graffiti around 9:00 a.m. just outside the school at 2840 West 12 Street. and alerted the school staff who then called the police.

It appears The graffiti was written with Crayon, the officials said. The Hate Crimes Task Force are investigating the incident as a Criminal Mischief as a hate crime.

Anyone with information regarding this incident is asked to call the NYPD’s Crime Stoppers Hotline at 800-577-TIPS.