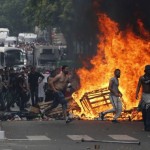 Thousands of pro-Palestinian protesters marched in French cities today to condemn violence in Gaza, defying a ban imposed after demonstrators marched on two shuls in Paris last weekend and clashed with riot police.

Demonstrators in northern Paris launched projectiles at riot police, who responded by firing teargas canisters and stun grenades. Demonstrators also climbed on top of a building and burned an Israeli flag. At least one car was set on fire.

A police spokesman said that 38 demonstrators had been arrested by early evening and that the clashes were dying down.

French President Francois Hollande said he understood emotional responses to the killing of Palestinians in the Gaza Strip in a flare-up of hostilities with Israel but would not allow violence to spill over into France.

“That’s why I asked the interior minister, after an investigation, to ensure that such protests would not take place,” he told journalists during a visit to Chad. Read more here.