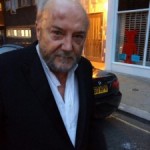 Doctors at a London hospital on Sunday released fiercely anti-Israel MP George Galloway, after he was attacked and beaten on Friday in the city’s Notting Hill neighborhood.

His suspected assailant, Neil Masterson, 39, is Catholic and has no apparent ties to Israel, according to local media.

Masterson approached Galloway as he stood in the street with supporters for photographs, and set upon him, while shouting about the Holocaust, an aide to Galloway claimed.

“Police were called at approximately 19:40 hours to Golborne Road, W10, after a man was assaulted in the street,” a Metropolitan Police spokesman said, according to i24 News. “Officers attended. The suspect was found a short time later and stopped.

“He was arrested on suspicion of ABH (actual bodily harm) and taken to the south London police station where he remains.”

Galloway, a Respect Party spokesman said “was posing for pictures with people and this guy just attacked him, leapt on him and started punching him.

“It appears to be connected with his comments about Israel because the guy was shouting about the Holocaust,” according to the party official.

British police had opened an investigation against Galloway over remarks he made on August 2nd, when he declared the city of Bradford in West Yorkshire as an “Israel-free zone.”

“We don’t even want any Israeli tourists to come to Bradford even if any of them had thought of doing so,” Galloway said, apparently in protest over Israel’s Operation Protective Edge in Gaza.

“We reject this illegal, barbarous, savage state that calls itself Israel – and you have to do the same.” Galloway declared.

At the time, a Conservative MP termed Galloway’s tirade as “shocking.”

Harlow MP, Robert Halfon, previously a political director of the Conservative Friends of Israel group told the BBC that “This ill-considered rant will cause great offence to many.”

“Fortunately,” he continued, “I suspect most Bradford citizens are like British people as a whole: tolerant and decent – and will ignore Mr Galloway’s demands, treating them with the contempt they deserve.

“They know that despite the tragedy in Gaza, that Israel is the only democracy in the Middle East, that both ordinary Palestinians and Israelis have suffered – not least because of the 13,000 rockets fired on to Israel by Hamas and Islamic Jihad, since the Israeli unilateral withdrawal from Gaza in 2005.”