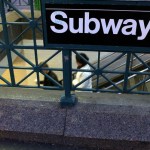 Anti-Islamic ads will begin appearing on a hundred New York City buses and at two subway entrances next week, the AP reports. The six ads include an image of American journalist James Foley, just before he was beheaded, standing next to his masked executioner.

The ads are paid for by the American Freedom Defense Initiative run by anti-Islam blogger Pamela Geller. She says the campaign tells truths about Islam and jihad that the U.S. government and mainstream media ignore.

All the ads feature a disclaimer that says the viewpoints are not endorsed by the Metropolitan Transportation Authority.