A hacker who has hijacked at least 8,000 websites with an anti-American message struck at least three New Jersey synagogue websites in recent weeks. Those who logged onto their sites were greeted with a photograph of Iranian president Mahmoud Ahmadinejad and a message, in slightly fractured English, urging the United States to stay out of the Iranian elections.

Among the sites hit were those of Congregation Ohev Shalom Marlboro Jewish Center, Congregation B’nai Israel in Rumson, and the nursery school of Temple Beth-El Mekor Chayim in Cranford.

Once notified, the synagogues were able to remove the offending message, with no apparent lasting damage.

Computer security experts have been tracking the hacker, who goes by the screen name “Nobody Coder” and whose e-mail ends with the country code for Russia. An Internet search revealed numerous sites discussing the hacker’s exploits, including attacks on universities and scientific journals. At “Nobody Coder Catcher,” victims can report attacks share tips on how to catch the culprit. 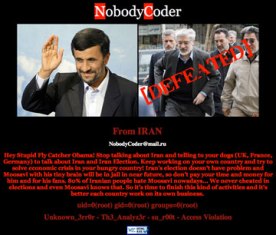 An NJJN reporter informed the Rumson and Marlboro synagogues Aug.17 about the hack, and the offending material was quickly taken down. The Cranford synagogue found out Aug. 27 through a concerned parent, but its director of education, Tamara Ruben, said she was unsure how long it may have been up.

“I was stunned, I couldn’t believe it,” she said. “They didn’t target the synagogue. They targeted the nursery school. It’s disturbing, but in a way it’s a relief that it’s not of an anti-Semitic nature.”

Ruben contacted the Cranford police department, which assigned a detective specializing in computer hacking. The department contacted United Synagogue of Conservative Judaism in New York as part of the investigation.

Ron Ginsberg, computer systems manager at USCJ, told NJJN he was unaware of the incidents at the Monmouth County synagogues. Marlboro Jewish Center said it never contacted authorities about the attack and officials declined to comment.

“This is the world in which we live, where a talented hacker no matter where they live – Russia, the Middle East – can break through the most sophisticated protection and hack a website,” Ginsberg explained. “We have multiple protection and firewalls, but United Synagogue does host many synagogue websites, and it’s possible he may have found vulnerability.”

The three synagogues are all Conservative.

Ginsberg said synagogues may have been used for the anti-American message because many militant Islamic groups see Israel, America, and Jews as one.

“If they attack a synagogue website it’s the same as attacking America,” said Ginsberg. “They are the same entity” according to such hackers.

This isn’t the first time that local Jewish agencies have been hit.

In January, the website of the Leon & Toby Cooperman JCC, Ross Family Campus, in West Orange was hacked by a group calling itself the “H4KurD TeaM”; the screen that came up presented a link to a site, now blocked, offering information about Muslim groups.

While the IT department of United Jewish Communities of MetroWest NJ does provide technical oversight to many of its beneficiary agencies, the JCC does its own website with a third-party hosting center, said Carl Scalzo, UJC MetroWest’s chief information officer. His group did, however, offer advice to the JCC after the hacking incident and helped put up a temporary site. He also said that in accordance with UJC MetroWest guidelines, “when something malicious happens to either physical property or a website” of one of its agencies, “we immediately notify Homeland Security and local authorities.” He said he believed the hacker was not targeting a “particular Jewish agency.”

As for providing security for UJC MetroWest’s own website, Scalzo said it is managed by a host network of over 100 other Jewish federations under the umbrella of national United Jewish Communities. Among the benefits of being part of a collective, he said, is the increased and effective security measures. “If we had to do it on our own,” he said, “we could not afford to protect ourselves. The technology is too expensive.”