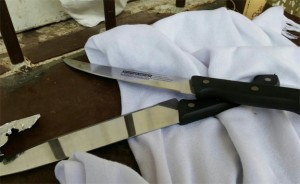 A terror attack was thwarted at the checkpoint near the Meoras Hamachpeilah in Chevron.

Two Palestinian female teenage terrorists armed with knives were caught by the Border Police. They were arrested and will be investigated by the Israeli Security Forces.

The teenage female terrorists aroused the suspicion of the Border Police when they shouted, “We came to free Palestine.”

At first, they refused to be searched. Afterwards, knives were found on them.

Police Superintendent Kafir Ha-Cohen stated that the “alertness of the fighters, their vigilance and their readiness have proven time and again that they were the tie breaker in the phenomenon of the lone wolf terrorists. Their fast and professional response was decisive in bringing the incident to an end without causalities.”