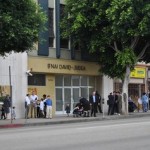 Congregation B’nai David-Judea, an Orthodox shul in Los Angeles, is planning to hire a woman clergy member by September 2015. This is the latest development in the continued adulteration of Orthodoxy by Yeshivat Maharat, Yeshivat Chovevei Torah, and the general Open Orthodox concept created by Rabbi Avi Weiss of Riverdale.

B’nai David recently hired Alissa Thomas-Newborn, 25, for a one-year “kehillah intern” position. Newborn is in her final year at Avi Weiss’ Yeshivat Maharat in New York and will complete her coursework from Los Angeles while interning at B’nai David.

Rabbi Yosef Kanefsky, B’nai David’s rabbi, said that Newborn’s internship will involve seven or eight Shabbosos over the coming year when she will address the full shul minyan and teach at various events. Upon graduation from Yeshivat Maharat, Newborn will earn the title of “maharat,” an acronym for manhiga hilchatit ruchanit toranit.

Kanefsky said that if Newborn’s internship goes well, the shul‘s board will put together a list of candidates and raise money for a permanent position for a female clergy member.

“Though we are still thinking through issues of title, we know that the title won’t be ‘rabbi,’ ” Kanefsky said, according to the Jewish Journal of Greater LA. “The fact that the title won’t be ‘rabbi’ has, I think, allayed the primary concern… It is very arguable that conferring the term ‘rabbi’ upon a woman violates no halachic lines… The best way to derail a good idea is by moving too far, too fast. If we want to continue advancing women’s participation in communal

Kanefsky has training from the leader of the Open Orthodox movement, having served under Avi Weiss at the Hebrew Institute of Riverdale for six years before moving to L.A. in 1996.