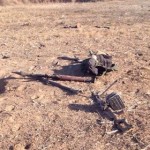 Ten Hamas terrorists infiltrated Israel early this morning via a terror tunnel, entering between the Erez checkpoint and the community of Nir Am. The group split into two contingents.

An IDF observation unit spotted the terrorists and forces were alerted. One contingent was attacked by the IAF and eliminated. The other was met by ground forces. All ten terrorists were killed. An anti-tank rocket was fired at the IDF forces during the fighting.

All residents in the area were ordered to stay in their homes and roads were shut down.

There are unclear reports of Israeli casualties as well.

The Hamas has made several infiltration attempts over the past days. On Saturday morning, two IDF soldiers were killed when a squad numbering 8 or 9 terrorists emerged from a tunnel near Ein Hashlosha and engaged an IDF motorized force.

On Thursday, 13 terrorists emerged from a tunnel in the Eshkol region, but were spotted and escaped back into the tunnel. A bomb was dropped on the entrance into the tunnel immediately after they re-entered it, but is not clear if they were killed by the bomb.