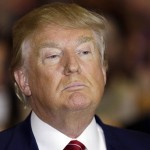 Hacktivist collective Anonymous has declared war on Donald Trump after his public statements against Muslim immigration this month.

The vigilante group, which has no organisation or hierarchy, is comprised of multiple independent sub-sects, and have been in the spotlight recently for their digital war on the Islamic State after the Paris attacks. The declaration of war against Trump was made in a video posted by a YouTube channel called ‘Anonymous Operations’ on Wednesday.

“Donald Trump. It has come to our attention that you want to ban all Muslims to enter the United States. This policy is going to have a huge impact. This is what ISIS wants. The more Muslims feel sad, the more ISIS feel they can recruit them,” states a cloaked figure in the video wearing a Guy Fawkes mask.

“The more United States appears to be targeting Muslims, not just radical Muslims. You can be sure that ISIS would put that up on their social media campaign. Donald Trump, think twice before you speak anything. You have been warned Mr Donald Trump.”

The video is shoddily constructed, with sound problems throughout and poor spelling and grammar, suggesting that this is one of the more amateurish Anonymous sects, but nonetheless the threat has been picked up by mainstream media and other Anonymous-affiliated figures and organisations who have endorsed the warning.