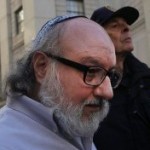 Anne Pollard, the ex-wife of the American-Israeli spy Jonathan Pollard, is set to sue the Israeli security establishment for “injustices” caused to her in the years leading up to his release from prison, and is demanding to be officially recognized as an Israeli operative, Channel 10 reported last night.

The Pollards were arrested in 1985 in the US for espionage. Anne served three and a half years in prison, and her former husband was released Friday morning, after serving 30 years. To mark the occasion, Anne Pollard returned from Israel, where she now lives, to Washington, DC, where the two were both arrested almost exactly 30 years ago.

According to the report, Anne Pollard is expected to seek millions of dollars in reparations from the state as she claimed her image had been deliberately tarnished by Israeli officials, who she said in some cases even portrayed her as “insane.” The bulk of the lawsuit, however, will reportedly deal with the arrangements concerning Pollard’s official status, as she is demanding to be formally recognized as an Israeli agent.

“[Anne] Pollard made many attempts to arrange her status in Israel and was told that she would have to wait for [Jonathan] Pollard’s release,” her attorney Roie Attias told Channel 10. “It is time to settle these commitments.”

After Anne’s parole, Jonathan Pollard filed for divorce, apparently claiming that he did not want her to wait for him as he expected to spend the remainder of his life in jail. But once the divorce was finalized Pollard remarried, and his new wife, Esther, began to work on the campaign to secure his release.

Pollard was arrested for selling US secrets to Israel, while working as a civilian intelligence analyst for the American Navy. One year later, Pollard pleaded guilty to conspiring to commit espionage and was sentenced to life in prison in 1987.

Pollard has said that he would like to move to Israel after his release, a request that has been ruled out by the American authorities as he is required to remain in the US for the five years that he is on parole. He is expected to settle in the New York area, and is barred from traveling outside the country, including to Israel, without permission.