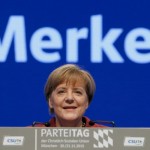 Despite receiving worldwide praise for her pro-refugee policy, German Chancellor Angela Merkel declared on Monday that “multiculturalism is a sham.”

Speaking at her party’s convention, Time’s “Person of the Year” said Germany may soon reach its capacity for refugees.

“We want and we will reduce the number of refugees noticeably,” she said, after declaring that “Multiculturalism leads to parallel societies and multiculturalism thus remains a living lie.”

That stance may be seen as a contradiction of her policy allowing one million refugees into Germany while most other European nations remain hesitant to open their gates. Read more at The Washington Post.