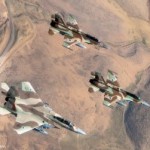 Less than ten percent of the nearly one thousand air sorties by the United States in Syria ended in dropping bombs – compared to Israeli Air Force strikes during Operation Protective Edge in Gaza, due to poor intel, lack of troops on the ground, fear of harming civilians, and long distances involved, Israel’s Channel 2 News reported Tuesday.

Even worse, in recent days, ISIS militants have released video clips and photos of coalition aid being dropped into ISIS-controlled areas, although most seems to have reached Kurdish forces.

Only 90 of 949 air attacks against Islamic State militants ended in munitions being released on targets, according to data released by the BBC. In comparison, IAF jets were able to triple the amount of goals in the “target bank,” thanks to the quality of intelligence.

The Americans, and their allies, have few if any intelligence personnel at the front and have to rely on reconnaissance and organizations who oppose the Islamic State. But while there are no shortage of such organizations, in Syria they are almost non-existent, according to the report, and ISIS’s main opponent is Assad’s army – a doubtful member of the coalition.

US President Barack Obama’s limitation on “boots on the ground,” is mainly reflected in the Syrian theater of operations. The US deployed a few hundred special forces command soldiers to Iraq, which, at least officially, are forbidden to be involved in the fighting. They can advise, mainly Kurds, or direct attacks from a safe distance.

A month ago, CNN reported that a few of the special forces sent to Iraq are Special Tactical Squadron 24 personnel – a unit which specializes in penetration of hostile areas to direct air strikes. They know how to talk to the pilots and are equipped with modern equipment and guidance gear, something which seems to be sorely lacking in Syria.

Apart from the problem of offering accurate targeting data to the pilots in the attacking aircraft, accurate intelligence information is the hidden hallmark of a successful assault.

“My role as a pilot is actually that of being an ‘end user,'” said retired Maj. E., a pilot who participated in quite a few operations, including Protective Edge.

“The attack itself is the end of a long process that includes the construction of a target portfolio data, including its location, type, etc, etc… The squadron’s attack is the end of the process and it cannot be implemented without intelligence.”

According to Maj. (Res) A., “tightening the ‘sensor-to-shooter cycle’ is based on the speed of intelligence, and can stem from forces in the field, standoff surveillance, and even interrogation of prisoners.

IAF Brig.-Gen. Amikam Norkin, the air force’s chief of operations, told Defense News in September that Israel had a “100 percent jump in visual intelligence about the targets, before, during, and after the attack.” The IAF hit more than 6,000 targets in Protective Edge, more than a thousand of them by F-16s providing ‘close air support.’

“Over the last year, we drilled in a very substantive way with the ground forces and we built a process where our fighters could attack at much closer distances … We did this hundreds of times during the operation,” Norkin said.

Norkin said that the goal, via tighter procedures and “networked air-land command and control,” was to get “bombs on target” in an exceedingly tight time window.

“Ten minutes from the moment the ground force commander designates the target, that target should no longer be there,” Norkin said.

Bur for coalition forces, distances were far greater: the British take off from Cyprus, which is several hundred kilometers away; other coalition aircraft take off from bases in Saudi Arabia and the Gulf Emirates, and aircraft carriers.

To reach their targets in Syria, they have to travel 1,500 to 2,300 km. “It means a long and exhausting flight,” said a retired Major. “And a lot of aerial refueling. Highly skilled American pilots are used to this kind of flying, but still, it’s not at all simple.”

Among the complications were no less than 1,449 aerial refueling operations, as of the middle of September, according to the BBC.

Another problem is the coalition’s fear of hurting innocent bystanders. The lack of intelligence as well as operational personnel on the ground increases the risk to injury to civilians. This topic is very sensitive to the coalition states, because such a violation could break up the coalition, and lose the support of the tribes that are fighting ISIS.

However, “In the end I’m sure when they hear a plane engine they run, so it’s already having an effect,” according to the Major.

“They are hiding, which means that they are investing their time in doing that, instead of attacking. They find it difficult to operate large forces, making it easier for the defender.

“It seems that this is why there’s been a change Kobane in recent days, where they have succeeded – again, for the moment – to blunt the advance of Islamic State forces, and take back some of the territory.”

This, of course, entails a greater chance of injuries, not to mention [coalition forces] falling prisoner.