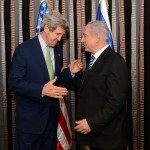 Secretary of State John Kerry will be meeting with Israeli Prime Minister Bibi Netanyahu this week to discuss the latest wave of Palestinian terrorism. Since the Obama administration has been saying that “all sides” need to take steps to end the violence, we can presume that Kerry will be demanding that Israel make some new concessions. Here are a few ideas as to what Kerry may ask for.

Reduce Checkpoints: For years, the administration has been saying that Israeli security checkpoints in Judea-Samaria (the West Bank) are “humiliating” to the Palestinians. It has never been clear how they are any more humiliating than American airline passengers being required to remove their shoes and go through full-body scans. But in any event, Secretary Kerry could demand that Israel remove checkpoints in more rural areas, and just keep a few of them in the busiest areas.

Oh, wait. Kerry can’t demand that. Because Israel already did it, years ago. Numerous checkpoints have been dismantled. Look how that turned out.

Release Imprisoned Terrorists: In the past, the U.S. has pressured Israel to release imprisoned terrorists as a “gesture” to the Palestinian Authority. It has never been clear why the PA, if it is truly against terrorism, would want terrorists set free. On the contrary, if the PA is moderate and opposes violence, it should want Israel to put more terrorists in jail. But in any event, Kerry could demand that Israel release some terrorists now, as a gesture.

Oh, wait. Kerry can’t demand that. Because the last time Israel did that, many of the terrorists quickly resumed murdering Jews. The Israeli public won’t stand for any more mass releases. They tried it already. Look how it turned out.

No New Settlements: Secretary Kerry said last week that the “massive increased in Israeli settlement activity” is provoking Palestinian terrorism. Yet for some reason Palestinian construction in those areas doesn’t seem to provoke Jewish terrorism. But never mind that. Secretary Kerry could tell Prime Minister Netanyahu that Israel must stop establishing new settlements.

Oh, wait, Kerry can’t demand that. Because Israel has not authorized the creation of a single new settlement in the territories since Prime Minister Yitzhak Rabin established that as the government’s policy in 1992.

End the Occupation: According to the Obama administration, the root cause of the conflict is the Israeli occupation of the territories. Israeli rule over millions of Palestinians makes them mad and causes them to engage in violence. So Secretary Kerry could demand an end to the occupation.

Oh, wait, Kerry can’t demand that. Because Prime Minister Rabin ended the occupation twenty years ago. In accordance with the Oslo II Accord, also known as the Israeli-Palestinian Interim Agreement, Rabin withdrew Israel’s forces from the cities where 98% of the Palestinian Arabs reside: Nablus (Shechem), Jenin, Qalqilya, Ramallah, Bethlehem, Tulkarm, Jericho, and almost all of Hebron. Later, Israel withdrew from 100% of Gaza.

In short, Secretary Kerry has a problem. He and his predecessors have already wrung from Israel every possible concession and retreat. There’s nothing left to demand–except from the Palestinian side. Is it possible that Kerry will actually ask the Palestinian Authority to make some concessions? Don’t hold your breath.