On Monday, October 1,the first day of Sukkos, the worldwide Jewish community received distressing news. The United States Supreme Court formally declined to review the 27-year prison term given to Sholom Mordechai Rubashkin, the former Agriprocessors vice president who was convicted of financial fraud after a huge immigration raid in 2008 at his Iowa meatpacking plant.

Without comment, the Supreme Court justices declined to consider an appeal filed by Sholom Rubashkin as they opened their new term. The decision lets stand his conviction on 86 counts of financial misconduct and a prison term that could keep the 52-year-old chasidic man locked up for the rest of his life.

Earlier this month, we shared the comments his lawyer, Nathan Lewin, one of the foremost criminal defense and appellate attorneys of our time, gave to Matzav.com: 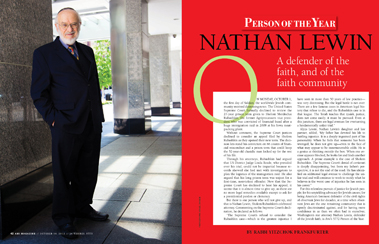 “The Supreme Court’s refusal to consider the Rubashkin case – which is the greatest injustice that I have seen in more than 50 years of law practice – was very distressing. But the legal battle is not over. There are, in American legal history, a few famous cases “that will not die.” The Rubashkin case is in that league. The Torah teaches that tzedek does not come easily; it must be pursued. Even at this juncture, there are legal avenues for overturning a fundamentally unfair trial.”

Ami Magazine has chosen Mr. Lewin as its Man of the Year, with an interview of Mr. Lewin by Mr. Yitzchok Frankfurter in its latest edition.

“Though the Supreme Court declined to hear the appeal regarding the 27-year prison sentence meted out to Sholom Mordechai Rubashkin, his attorney Nat Lewin told Ami Magazine that he will not give up.

“Lewin’s daughter and law partner, Alyza Lewin, told Ami, ‘My father has devoted his life to battling injustice. It is a deeply ingrained part of his personality. When he feels that someone has been wronged, he does not give up-even in the face of what may appear to be insurmountable odds. When one avenue appears blocked, he looks for and finds another approach. The Supreme Court’s denial of certiorari is deeply disappointing, but from my father’s perspective, it is not the end of the road. He has identified an additional legal avenue to challenge the unfair trial and will continue to work to rectify what he believes is the worst case of injustice he has seen in his career.’

“For this relentless pursuit of justice for Jewish people; for his unyielding advocacy for Jewish causes; for being America’s foremost defender of the civil rights of observant Jews for decades, at a time when observant Jews are the one remaining community that is openly discriminated against; and for having more confidence in us than we often had in ourselves; Washington’s star attorney Nathan Lewin, defender of the Jewish faith, is Ami’s 5772 Person of the Year.”