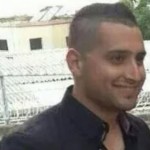 “Zidan Saif was a member of Israel’s Arabic Druze minority, a community of proudly patriotic Israelis. Like other Druze, Zidan served in the IDF, and after his service he became a policeman in Jerusalem,” Alexander Chester wrote on his Facebook page.

“Three weeks ago, when he heard of a terrorist attack on a synagogue, he didn’t hesitate for a moment because he wasn’t Jewish. He ran into a service much like this one in a room much like this one, and gave his life saving the lives of others praying in that room. He wasn’t just a Jewish hero, he was a hero for humanity,” Chester added.

Rinal Saif, Zidan Saif’s widow, said that when the couple’s baby grows up, “everyone will ask him why his name is Zidan. And then he will explain that in 2014, a hero police officer was killed in the State of Israel, and people will remember and remind others of my husband. That keeps me strong. I know that Zidan’s name will not be erased from the history of the state’s defense, even abroad. I have a lot of appreciation for the couple and I am very grateful to them for their decision. I would like to meet them. I am certain that when our baby girl Larin grows up, she will be very proud to know that someone was named after her father.”