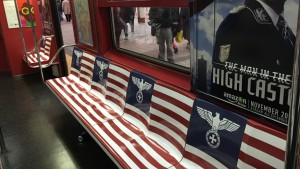 Amazon has decided to pull controversial subway ads featuring what appear to be Nazi symbols, following a livid response.

The ads for “The Man in the High Castle,” which are running on the 42nd Street Shuttle or S Train, feature what look like Japanese Rising Sun flags and Nazi imperial eagles. The show, based on the 1962 Philip K. Dick novel of the same title, imagines an alternate history where the Axis powers win World War II.

As Matzav.com previously reported, the ads covered just one subway car in the entire system, but they covered the entire car. The row of seats on one side of the train show an American flag with the Nazi imperial eagle symbol where the stars should be, while the other shows the Japanese rising sun flag with the blue of the U.S. flag and stars added.

“It’s the whole train, and these are Nazi symbols – symbols that glorify Nazi Germany — for somebody to walk into that,” Dinowitz said.

Dinowitz said he is offended as a Jewish man and as a New Yorker.

“There could have been some elderly person who might have been a holocaust survivor, for example. Just to see that, it’s really shocking,” Dinowitz said. “And that’s not the way to get people to watch a TV show.”

“While these ads technically may be within MTA guidelines, they’re irresponsible and offensive to World War II and Holocaust survivors, their families, and countless other New Yorkers,” de Blasio said in a statement. “Amazon should take them down.”

A Metropolitan Transportation Authority spokesman confirmed that Amazon decided to pull the ads late Tuesday afternoon. Prior to that decision, despite backlash from state lawmakers and city leaders, the MTA chose to allow the ads to stay.

“The MTA is a government agency and can’t accept or reject ads based on how we feel about them,” spokesman Kevin Ortiz said in an earlier statement. “We have to follow the standards approved by our board.”

Adam Lisberg, a spokesperson for the MTA, also explained that the public agency had no choice but to allow the ads.

“We cannot pick and choose the way WCBS radio can — whether it likes an ad or doesn’t like an ad,” Lisberg told Silverman.