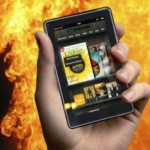 While exact sales figures for the new Amazon Fire smartphone haven’t been released, the numbers can’t have been good. Amazon announced on Monday it was cutting the price to 99 cents from $200 just over two months after releasing it. The deal will still require a two-year contract with AT&T, but comes with a year free of Prime, which costs $99.

Last year, the Facebook phone followed a similar cut to 99 cents, but failed to take hold in the competitive market. According to the New York Times, stores in the Bay Area offered sales estimates ranging from one to ten phones sold total. Read more at the New York Times.