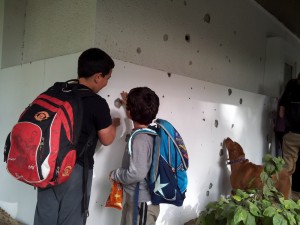 Some 30 Israel children at Kibbutz Nir Oz avoided disaster Thursday morning as Palestinian terrorists in Gaza fired no less than 11 mortar shells into their village.

A father of one of the children, Jan Berman, was wounded in the attack, as he shepherded the kids to safety.

Berman “was at the kibbutz children’s house with his wife,” he “pushed one of the nursery teachers and a child into the safe room, saving their lives,” according to Israel’s Ynet news.

The father sustained moderate to serious shrapnel wounds in the shoulder, according to Israel’s NRG News and other sources, and was evacuated to Soroka Hospital in Beersheva for treatment.

“I saw a lot of blood and he looked at me. He was so strong – he was really worried the kids would see him this way,” a teacher at the facility told Ynet.

“There are [normally] 30 kids in that kindergarten, but, luckily, the structure is fortified, including the windows. There’s external damage, and cracked windowpanes, but none of the shards went inside the building,” a police official said.

Israeli police chief Yaakov Mor, from nearby Ofakim, told NRG News that the children’s house wasn’t the only one damaged in the attack.”While the siren was still blaring, there were at least 6 rockets hitting the kibbutz. The children were staying in a bomb-protected area at the time. An adult who was with them gathered them all in one of the rooms and kept them away from any doors and windows. In that he actually saved the children,” according to the head of the community.