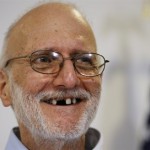 Jewish-American contractor Alan Gross says he was mistreated by his captors and felt abandoned by his own government after Cuba arrested him and accused him of spying, AFP reported Friday.

In his first major interview since his release last year, Gross said exercise, family memories and humor kept him going though his five-year ordeal.

“I had to do three things in order to survive, three things every day,” he said, in an excerpt from an interview to be broadcast in full on Sunday.

“I thought about my family that survived the Holocaust. I exercised religiously every day and I found something every day to laugh at,” said Gross. Read more.