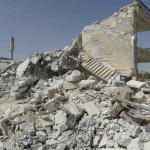 The leader of al Qaeda’s Syria affiliate vowed Sunday that his group would fight back against the United States and its allied nations, and would “use all possible means” to do so.

He also warned that the conflict would reach Western countries that join the alliance. Abu Mohammed al-Golani, leader of the affiliate, which is known as the Al-Nusra Front-and viewed by the U.S. as a terrorist group-made the remarks in a 25-minute audio recording.

He said the group would defend “the people of Syria” and warned that the airstrikes “will cause the battle to be transported to the hearts of your own homes.” Last week, the U.S. and five Arab allies launched airstrikes against ISIS in Syria. Read more at NBC News.