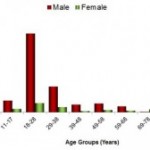 Al Jazeera published a list of Gazans who died since Israel’s Operation Protective Edge Began two weeks ago, based on data provided by Ashraf al-Qedra, a spokesman for the Gaza Health Ministry.

A breakdown by age and gender published on the Israellycool blog on Sunday confirmed the trendreported in a similar analysis last week by CAMERA,  the Committee for Accuracy in Middle East Reporting in America, that showed most of the dead were combatant age males, not women or children.

Israellycool linked to an article published by Bret Stephens in The Wall Street Journal in 2008 about that conflict between Hamas and Israel, referring to another report about the conflict in 2002, showing that it has always been impossible for Hamas to “back up the claim of indiscriminate killing by the IDF, let alone the crazy charge of deliberately targeting civilians.”