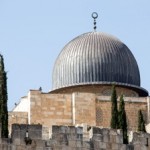 The current upsurge of terrorist attacks against Israeli citizens is framed by Palestinian and Arab media as a battle for the Al-Aqsa Mosque, with expressions such as “Al-Aqsa is in danger” repeatedly used.

But this popular narrative is completely false, according to experts interviewed by Tazpit Press Service (TPS). The narrative has been used by Palestinians continuously for almost 100 years to incite against Jews and fuel the ongoing conflict, regardless of Israeli actions.

“Every year, before the Jewish New Year, a massive event is held in the city of Umm al-Fahm called ‘Al-Aqsa in Danger’,” says Dr. Shaul Bartal from the Middle East Department in Bar Ilan University. “The main speech is delivered by Sheikh Raed Salah, head of the northern branch of the Islamic Movement, in which he praises ‘resistance’ to Israel and encourages terrorist attacks.”

The massive Umm al-Fahm gathering, which has been held every year since 1996, even took place during the second Intifada when the Temple Mount was closed to Jews for a period of three years.

“This year, 50,000 people attended the event,” said Dr. Bartal to TPS. “They come home and spread the message, and indeed we can see that every year after the Jewish new year, around September-October, there is an escalation in Palestinian violence, as we also see this year.”

This analysis suggests that the escalation in violence doesn’t stem from a policy change by Israel, but rather corresponds to intensification of Palestinian incitement regarding Israeli ‘plans’ to harm the mosque.

“It’s all for propaganda,” said Dr. Nesya Shemer from Bar Ilan University of the narrative.

“Jews do have an ideal of building the Temple, but nobody is actually planning to take action in this direction. It’s more about waiting for the coming of the messiah,” Dr. Shemer told TPS.

“There may be fringe underground extremist groups that do plan this, but this definitely isn’t a major goal or issue in Jewish society.”

Bartal agrees with this point. “Over the past century the Jews gradually became the ultimate “devils” in the Islamist eyes. The stories about the Jews conspiring and digging tunnels under the mosque trying to destroy it, take control over it, divide it, are a libel. Israel has vowed to preserve the status quo from 1967.”

According to Bartal, the libel has been prominent since the days of Grand Mufti Haj Amin al-Husseini in the 1920s. “It always exists, just the context changes. Husseini popularized the claim that the jews are going to destroy Al Aqsa and build the ‘fictitious’ temple instead. This incitement sparked the Arab riots of 1929.”

In addition, there are organizations, some little known, who publish incitement against Israel. “‘Al Quds International Institution’, headed by Sheikh Yusuf al-Qaradawi, is a little known organization which publishes all sorts of inciting material such as photos, videos and caricatures,” said Dr. Shemer.

“Al Quds Institution, Hamas, and the Islamic Movement headed by Raed Salah form a triangle,” Shemer told TPS. “Together they fund and encourage the Murabitun and Murabitat [groups that harass Jews on the Temple Mount]. This serves as an easy tactic to direct the public gaze away from them and towards the ‘common enemy’.”

A prominent issue in the incitement is the Jewish Temple Mount organizations, who protest the restrictions on Jewish presence in the compound. According to Bartal, every move by these organizations is viewed by the Arabs as another step to drive them out of Al Aqsa. “The theme is hugely popular and is reported in many media outlets. There are also books written about ‘the Jews taking over Al Aqsa’.”

The most well known Temple Mount activist is Yehuda Glick, who was shot and critically wounded by a Palestinian assailant one year ago and managed to recover. Glick supports going on to the Har Habayis despite the fact that poskim forbid doing so, as it is a Torah prohibition.

Talking with TPS, Glick says that contrary to what is reported, the Temple Mount activist groups do not pose any threat to Al-Aqsa.

“Our goal is to fight for equal human rights, coexistence and religious freedom, without harming or destroying any of the existing structures,” said Glick to TPS. “We welcome anyone who desires coexistence, cooperation and peace. Whoever comes with the intention of war against Israel, however, will fail.”

Glick claims that the Arabs are the only party endangering the mosque: “The Islamic Movement uses it as a military base rather than a mosque. As long as the mosque is being used to incite and fight against Israel, Israel will have to respond. If they act in peace and respect, Israel poses absolutely no threat to Al-Aqsa.”