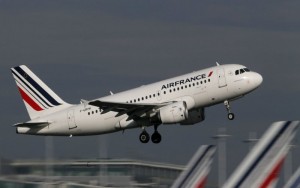 Two Air France flights traveling from the U.S. to Paris were diverted after anonymous bomb threats were phoned in, the airline confirmed on Tuesday.

A second flight traveling from Washington Dulles to Paris, Air France flight number 55, was landed in Halifax, Nova Scotia, according to Flightradar. Passengers have disembarked on both planes. Read more at the Guardian.