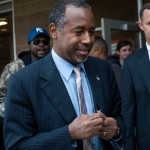 A top adviser to Ben Carson on terrorism and national security claimed that the candidate needs a lot more information on the Middle East.

“Nobody has been able to sit down with him and have him get one iota of intelligent information about the Middle East,” former CIA agent Duane R. Clarridge told The New York Times.

The campaign shared segments from a calamitous foreign policy interview from this past weekend on Facebook, despite insider conversations about its failure. Additionally, Clarridge said Carson needs weekly conference calls to “make him smart” on foreign policy. Read more at The New York Times.