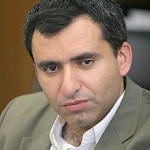 The Israeli minister, according to the report, relayed to Lavrov Israel’s three main concerns: preventing the flow of weapons to the terrorist group Hezbollah, maintaining a quiet border in the Golan Heights and upholding the ban on the use of chemical weapons.

While the meeting was scheduled in advance to discuss economic issues, ultimately it ended up happening a day before Russia headed to international talks on the Syrian war on Friday and Saturday. The Israelis used Elkin’s trip as a chance to lay out their concerns.

“Israel believes this meeting is very important in light of the Vienna meetings and what appears to be a significant improvement for the battered Syrian president, Bashar Assad, ” reported nrg. Additionally, Lavrov reportedly described to Elkin some of Moscow’s plans for the months ahead in Syria.

According to the report, the Israelis made the request for the meeting between Lavrov, a close confidant of President Vladimir Putin’s, and Elkin, who is not only close to Netanyahu but was also his translator during the prime minister’s meeting with Putin last month as Russia was stepping up its aerial campaign in Syria.