For the 16th consecutive year, a large group of businessmen and professionals, from North America and beyond, spent Monday through Thursday in Yerushalayim, learning Torah. The banquet hall at the Ramada Hotel was turned into a Bais Medrash, with a kol Torah and pilpul chaverim.

The Yarchei Kallah intensifies each year. The 2016 Yarchei Kallah drew close to 225 men and 75 women. Not only does the number of participants increase each year, but the diversity does too.

Rabbi Asher Weiss, Av Beis Din of Darchei Hora’ah and Rosh Yeshiva of Yeshiva Darchei Torah, delivered a shiur hakdamah on the sugya of the Yarchei Kallah: Tzitzis. Rabbi Weiss has delivered a shiur at the Yarchei Kallah since its inception, and feels a powerful kinship with the program’s participants. “This is a very special yeshiva in Yerushalayim…and it grows from year to year,” he remarked.

Rabbi Weiss articulated the fundamental obligation of Tzitizis. The extensive lomdishe discourse drove home the personal importance this mitzvah has for each Yid, and how it elevates him while being worn.

On Monday, as on each of the subsequent days, there was a Hachanah Shiur by Rabbi Shlomo Gottesman, Esq., editor of Yishurun, as well as a hachana/chazara shiur by Rabbi Shlomo Cynamon, Rav of Khal Bnai Torah of Flatbush. Each day also featured an English language Daf Yomi shiur by a variety of Maggidei Shiur.

Each one of the following three days featured a similar all day schedule of diligent learning, preparation, chavrusos, and shiurim from foremost maggidei shiur.

Rabbi Kaplan delivered an intriguing shiur on various lesser known halachos of tzitzis, with intense input from the audience. Rabbi Kaplan stressed that although one is patur from tzitzis if he doesn’t wear a four cornered garment, leading poskim throughout the generations warned about the importance to wear tzizis, throughout the day.

Other halachos discussed by Rabbi Kaplan included the prohibition of giving young children pasul tzitzis to wear, and whether one fulfills the mitzvah and can make a beracha when borrowing someone else’s tzitzis or wearing a Tallis that belongs to the shul. Rabbi Kaplan advised the audience to make sure to have the tzitzis, including the chutin, purchased before completing the pair or wearing it.

In the evening, Rabbi Hirsch gave a live presentation on how to make tzitzis, according to the rulings of Rav Elyashiv zt”l.

Rabbi Zilberstein presented some unique halacha questions: A father collecting money for his baby’s surgery was given $30,000 by a donor’s secretary who confused him with a different collector with a similar name. Is he permitted to keep the money? A meshulach was given a generous donation after being tipped off on the Torah question that a particular donor wanted answered. Is he allowed to take the increased donation or is he required to ‘fess up to his prior knowledge – and opportunity to prepare? An American family paid for an armed guard to accompany them in the Old City of Yerushalayim during their son’s Bar Mitzvah trip, but the guard discovered, after the outing, that his gun wasn’t loaded. The guard’s question was that while the trip proceeded without incident, he had really not provided the services for which he was contracted. Is he allowed to keep his fee?

The venerable posek and son-in-law of Rabbi Elyashiv zt”l mentioned several halachos related to tzitzis, including the heter of the Chayei Adam to snip kosher tzitzis in order to replace it with thicker chutim, and his psak permitting the use of a Tallis to tie up a thief who broke into a shul on Shabbos.

The program included a women’s program with Rebbetzin Tziporah Heller, Rebbetzin Rena Tarshish and Rabbanit Yemima Mizrachi; coupled with tours of Yerushalayim and other parts of the Holy Land. 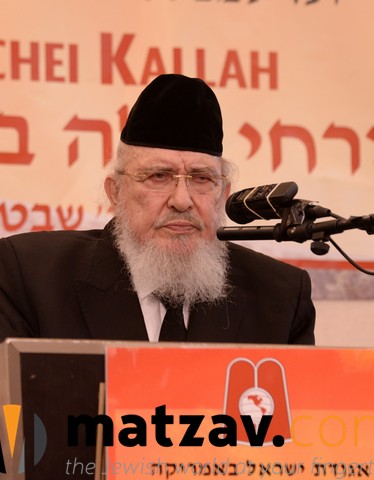