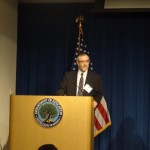 Rabbi Chaim Dovid Zwiebel, executive vice president of Agudath Israel of America, featured prominently at the U.S. Department of Education’s 10th Annual Private School Leadership Conference, which was held in Washington, DC on Monday.Hundreds of leading communal and religious figures from across the country, representing diverse nonpublic school interests, listened attentively as Rabbi Zwiebel participated in the high-profile “The Next 10 Years – A Conversation with National Leaders” panel discussion, along with three representatives of other major nonpublic school communities: Sister John Mary Fleming of the US Conference of Catholic Bishops; Drew Smith of the Friends Council (Quaker schools); and Will Estrada of the Home School Legal Defense Association.

Each panelist was given the opportunity to deliver a brief monologue, and Rabbi Zwiebel’s remarks presented a stark contrast to the prevailing sentiments. Whereas nonpublic school education, particularly in religious schools, are in a decline in most of the country, Orthodox Jewish schools have seen significant growth overall, especially in major communities. Rabbi Zwiebel mentioned startling statistics from New York City: Over the past decade, the Big Apple’s nonpublic school student population saw a net decrease of approximately 23,000 students, but the Jewish student population increased by about 20,000. “In our communities, when we speak about ‘school choice,’ it is within the realm of which Jewish school to send to,” said Rabbi Zwiebel.

The fundamental contrast between the Orthodox community and other nonpublic school communities is the Orthodox community’s recognition that a religious Jewish education is indispensable to the Jewish people’s continuity. Rabbi Zwiebel advised representatives of the other communities to have their leaders stress a similar message to members of their communities in order to see strengthened enrollment. He stressed that with mainstream society’s values drifting further away from traditional religious teachings, the necessity for a religious education increases for members of all religions who desire that their children follow in their footsteps.

The panelists discussed various logistical aspects of nonpublic schooling, including how to incorporate technological advances into the nonpublic school classroom. One key point of discussion – which stands at the core of the nonpublic school sector – is how to amass adequate funding to run quality schools. Rabbi Zwiebel explained that by promoting the necessity of the schools for the community’s religious and cultural survival, it invites donations from philanthropists who are not school parents or otherwise directly associated with the institution.

With the complex issues surrounding the interpretation of the separation of church and state, and political opposition from teachers unions and other interests, receiving adequate government funding has been a longstanding challenge. Rabbi Zwiebel urged nonpublic school parents and their supporters to realize the political impact they can have if they work as a bloc to vote and lobby for the interests of nonpublic schools. He expressed optimism that the government can provide greater assistance to nonpublic schools and their parents, in a realistic and constitutional way. “The parental right to choose the most appropriate education for their children is not abstract,” Rabbi Zwiebel exclaimed. “It should be made accessible, and government policies should enable that.”