This past Wednesday, a delegation of Jewish community activists and representatives from Jewish educational institutions from across the state converged on Annapolis to engage in advocacy efforts on behalf of the BOAST (Building Opportunities for All Students and Teachers) Maryland Educational Tax Credit. The BOAST program seeks to provide lucrative tax credits to businesses and corporations that contribute to nonpublic school scholarship foundations providing scholarships for low-income students.The Agudath Israel delegation, led by Rabbi Ariel Sadwin, director of Agudath Israel of Maryland, held meetings with Maryland’s Lieutenant Governor, Anthony Brown; Senate President Mike Miller; Speaker of the House Michael Busch; as well as other legislative staffers. 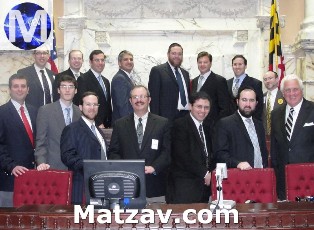 The BOAST Bill, now in its fifth legislative cycle, has garnered unprecedented support this session. Following up on his pledge to support the BOAST legislation at a recent AIMD leadership reception, Governor Martin O’Malley yesterday submitted a letter to the Senate Budget and Taxation Committee urging its support for BOAST. The delegation was further heartened by the encouraging words of Lieutenant Governor Anthony Brown regarding the plight of nonpublic schools, and by his offer to help advocate on such schools’ behalf.

Rabbi Simcha Merkin, director of community relations for the Yeshiva of Greater Washington and member of the delegation, commented: “With our yeshiva offering scholarships to assist almost 65% of our parent body, we are left with a staggering deficit that needs to be addressed in order to continue achieving educational excellence. The BOAST program would be a tremendous help to our community.”

Rabbi Sadwin added that he was “thrilled at the recent surge in support for BOAST.”

“I hope,” he said, “that this momentum can carry the BOAST Coalition through a successful House Ways and Means Committee hearing and subsequent committee vote.”