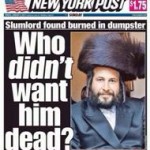 Hella Winston was surprised that her name appeared at the bottom of the recent New York Post report about the murder of Brooklyn businessman Menachem Stark, indicating her “additional reporting” to the story. She had not written any of the article – and certainly not its tasteless, insensitive headline (which implied that an unlimited number of people surely wished the Chassidic businessman dead) or the article’s incendiary opening words: “The millionaire Hasidic slumlord…”

She had nothing to do, either, with the rest of the ugly piece, which was rife with unnamed “sources” and unsubstantiated innuendo. (It went so far as to dredge the cesspool of a rabidly anti-Orthodox blog to find what it apparently deemed a journalistic gem – an anonymous posting opining that the victim’s “slanted shtreimel on his head gives his crookedness away.”). She had not seen the article before its publication.

Ms. Winston, a sociologist by profession, had simply been contacted by the article’s main writers, she says, and provided them a small piece of information of no great consequence. Needless to say, the Post’s odious offering deeply hurt the murdered man’s wife, children and community. And I have no doubt that Ms. Winston is herself pained to have been associated in any way with the tabloid’s loathsome “report.”

What’s significant, though, is that the article’s writers cared to contact Ms. Winston, who has no prior connection that I know of with the paper.

What likely inspired them was the fact that she has some familiarity with at least part of Brooklyn’s charedi world (though Post reporters have no dearth of contacts who actually inhabit that world). She is best known, in fact, for a book she wrote several years ago that focused on young people raised in chassidic communities who abandoned their upbringings to pursue more culturally American lives. Through their words, the book portrays communities like those in Borough Park and Williamsburg as small-minded, constricting, suffocating environments.

What’s more, in 2006, Ms. Winston wrote an op-ed for The New York Times in which she described an unusual Pesach seder, whose participants were people who had “[broken] free of strictly Orthodox communities” and of the “myriad rules and regulations” that, in such places, “often [come] at the expense of the meaning of the holiday itself.” Passover, to them, she wrote, “embodies how strict Orthodoxy has become little more than social control.”

And in the Winter 2006-2007 issue of the Jewish feminist publication Lilith, Ms. Winston wrote of the “rigid gender roles” in Orthodox communities, the regulations that “control… women’s bodies and their mobility”; and of how yeshivos “can become breeding grounds” for deviancy.

Then there is the slew of articles Ms. Winston has written for the New York Jewish Week, practically all of which focus on (real, asserted or imaginary) unsavory happenings in the charedi world.

In 2011, for one instance, after the horrific murder of a little charedi boy, Leiby Kletzky, she wrote a lengthy piece in that paper contending that the Brooklyn charedi neighborhood volunteer security force Shomrim, which had played a major role in identifying the vehicle used in the boy’s abduction, had acted irresponsibly in the case and possibly hindered the police. The alleged critics of Shomrim quoted – “officials” and “sources” -were all unnamed. And “some,” the piece confides, believe that the murderer’s “violent tendencies… were known to people in the community who should have, but failed, to report him.” No evidence for any such knowledge was presented, nor has any emerged in the ensuing years.

The article then digressed into the halachic realm of mesira, or “informing,” on suspected pedophiles. There was no evidence of sexual abuse in the case, and no evidence was offered at the time (or has been uncovered since) that Leiby’s killer, currently serving 25 years to life in prison, is a pedophile.

So it’s not hard to imagine why those assigned by the Post to deliver the sort of article about the more recent murder that its readers savor – one filled with as much titillating information or misinformation as might be gathered on deadline – turned to a writer who has presented a negative picture of the Chassidic community in a book and numerous articles.

They could have turned, too, to any of a number of writers for Jewish media. Like Jay Michaelson of the Forward, whose anti-religious screeds seem to say much more about his wild anger at Judaism than about the community he regularly lambasts. Or to his colleague, the graphic artist Eli Valley, who seems to share Mr. Michaelson’s emotional agitation, although he is considerably more creative. Or to any of a number of columnists at organs like the Los Angeles Jewish Journal.

The unsavory exists, to be sure, in Chassidic (and non-Chassidic and non-Orthodox) communities, as it does in every non-Jewish community. That’s unfortunate and depressing. But so much of the Jewish and general media seem to relentlessly focus on Orthodox wrongdoing, and so often in in a journalistically irresponsible, if not libelous, way. Why that is so is something for a psychologist to ponder. For the rest of us, it should be enough to simply note the fact, and bemoan it.

No one really expects a New York tabloid to embrace accuracy and objectivity; such papers exist to titillate and scandalize their readers, not inform them.

But impartiality, fairness and truth shouldn’t be too much to ask of Jewish media. Unfortunately, the day when those ideals are respected by those organs has yet to arrive.