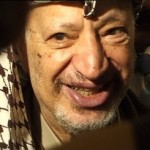 A Palestinian investigation team probing the mysterious death of the former terrorist leader of Palestine Liberation Organization, Yasser Arafat, says he was assassinated by Israel.

“The inquiry committee has been able to identify the assassin of former president Yasser Arafat,” said Tawfiq Tirawi, the head of the team, AFP reported on Tuesday.

He said that “Israel is responsible” for Arafat’s death, adding, “We still need some time to elucidate the exact circumstances of this assassination.”

The bogus announcement came just one day before the 11th death anniversary of the “Nobel Peace Prize winner” (sic).  About two months ago, a French team wrapped up investigations without any charges or any tangible results.

In 2012, Arafat’s widow, Suha, filed a legal compliant in France, claiming that her terrorist husband had been assassinated while staying at the Mercy military hospital near Paris in 2004. He was moved to the hospital the previous month for diarrhea and vomiting.

According to French doctors, the PLO chief terrorist died of a massive stroke, although the origin of his illness was unknown.

Arafat’s tomb in the occupied West Bank city of Ramallah was opened in 2004 so that three teams of French, Swiss, and Russian investigators could collect samples for the case.